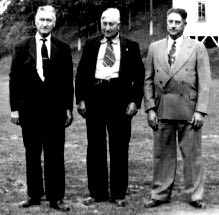 That’s the legendary Mr. Mason in the middle, between his two brothers. You can’t see his wooden leg.

There’s a lot of water in West Virginia. Grandma and Mr. Mason always lived near creeks and rivers. Sometimes the creeks — Grandma pronounced the word “crick” — were small to tiny, the sort that could be dammed with rocks by small children and hunted for crawdads, minnows and tadpoles. We would keep our captured prey in big quart Ball jars, and they would live longer than you might think until we forgot to change the water and they would die. We watched many a tadpole turn into a frog. There were bigger creeks where you could wade across though the rushing water which might come up to your knees and threaten to knock you over. And not just threaten; it would knock you over and coming home totally soaked was not unusual, or cause for much concern from any adults. Then there were the rivers, the wide, deep slow ones and the rocky rapid ones. I don’t remember anyone having a boat, even a rowboat, but you could go swimming and fishing from the shore. My mother loved to tell stories about living for several years as a child on a houseboat down on the Ohio River.

The one thing these various iterations of running water had in common was a propensity to flood, to overflow their banks and creep up on us until they were, often, at our doorstep. Or in the house.

We were visiting Grandma when several of these floods occurred.

In Beatrice, it became obvious why the house was built on brick pillars. I remember these pillars as being giant — at least twenty feet tall — but surely that’s a matter of a child’s imagination. In the Beatrice days, I was less than two feet tall; everything seemed giant to me. They probably were six or seven feet high, but not high enough, evidently, as I remember someone pointing out to me on the wallpaper where the water had come up inside the house during past floods.

My memory of the Beatrice flood is tattered, fragmented, fluttering images, muted, the colors muddy shades of sepia, like remembering a stuttering old foreign film I might have seen years ago and only dimly remember. The rain came, torrential, for several days as the river behind Grandma’s house — the Internet tells me this was probably the Hughes River — overflowed and began creeping up the flat field behind the house. Or at least this must have been the case, because my first real memory of the event was of my sister and I, holding hands, crossing the swinging bridge in front of the house in a line behind the adults. Two men were carrying an old sofa that usually sat on the front porch. It’s still raining. We trek across the dirt road in front of the house and slog up a low hill. On the top of the hill, the sofa is put down facing the house and the rising floodwaters. We all sit on the sofa, in the rain, and watch the water rise.

Could this be true? I’ll have to ask my sister.

The memory of the flood at the Walker house is clearer as I was older when Grandma and Mr. Mason lived there. We would drive to Walker at least several Sundays every month, every season except winter. I think of that drive, as a child, as taking a long time, but it was probably only a half an hour away from Parkersburg, or a bit longer because it was on dirt roads that cut through the mountains and hollows. (Pronounced “hollers.”) My sister and I loved going to Walker when we were kids. When I was older it wasn’t as much fun. I once spent a couple of weeks there by myself when I was in high school or junior high after a bout with Scarlet Fever, a disease you don’t hear much about these days. I’ve pointed out elsewhere that antibiotics, which can now quickly cure Scarlet Fever, were not as prevalent in West Virginia in those days as they are now, if they were available at all. I was really sick with a high fever, red rash and coated white tongue that is the signature of this disease. After the worst was over – it was still quite possible to die from this disease — it was decided that I would be sent to Grandma’s to recover in the fresh country air. I remember these couple of weeks as me lying on an old army cot in the sun, reading many science fiction books. By then I was an inveterate reader, so I appreciated the reading time, but with no other kids around it was pretty boring.

The flood I remember was years before this. The Walker house was small, two bedrooms on the first floor, one bedroom upstairs, kitchen and dining room. The flood was before Mr. Mason had installed indoor plumbing, so there was no bathroom, just the privy outside the house. We got our water from a red hand pump outside the kitchen door. Every time I used that pump I remembered Mr. Mason’s joke and being pissed on by the cow. If you don’t know what I’m talking about, you need to go back and read the earlier entries.

The flood. Night. My sister Sandy and I were in the downstairs bedroom, our parents upstairs. I am sleeping. My sister shakes me awake. She is standing beside the bed and says, “Allen, wake up. Do you want to come outside and watch the flood?” I had no idea what she was talking about, so I said no. She walked away, and I heard her sloshing through water. I looked over the edge of the bed and saw two inches of water on the linoleum floor. I could make no sense of this, so I went back to sleep.

The next day the water had receded from the house, but, sure enough, just beyond the yard where the dirt road used to be there was now a new, fairly large river. I don’t remember anyone being particularly upset; men and women like Grandma and Mr. Mason took events like this in stride. These things were acts of nature, unavoidable regular occurrences, part of country life and would soon pass, as they always did.

We sat on the porch, watching stuff float by in the river — outhouses, trees, drowned cows with all four legs in the air, chickens on floating branches, dogs and cats on debris — while life went on pretty much normally. There was no electricity, but there wasn’t much electricity nor the need for it at the best of times. The outhouse in the side yard was high enough to remain functional and firmly grounded. The pump worked. Grandma was able to cook on the woodstove as usual. Mr. Mason rocked in his rocker on the porch and shaved strips off his wooden leg. Just another weekend at Grandma’s.

The first flood, Beatrice, may be some sort of false composite cobbled together in my mind from stories I heard, but I am fairly sure about the Walker flood. What strikes me is that when I’m gone, (dead) and my sister is gone, (dead) that these memories will be gone as well. I am aware that this is another of my hopelessly banal conclusions, platitudinous and startlingly unoriginal, but it keeps gnawing at me. These are pieces of a past that my children will never experience. Does anyone care? Are they of any worth? These memories tell me that we now make too much of the small discomforts that come of heavy snows, electrical outages, minor flooding, oh no! the Internet is out! — our modern small disasters. Back then folks took the time to sit and watch the dead cows float by, knowing that the water would soon recede and life would go on pretty much the way it had before. The continuum… well… continues… doesn’t it? Maybe they lost some stuff, but they didn’t have much to loose in the first place, so it didn’t bother them very much. I feel a musical theme or themes coming on here: first it’s Annie singing Tomorrow, now it’s Janus Joplin singing Freedom’s Just Another Word, and in the end of Gone With the Wind, Scarlett O’Hara standing in the barren field and announcing, ‘Tomorrow is another day.”

I have warned you before, Dear Reader: If you are searching for complex philosophy, soaring images and deep thoughts, look not to these pages.

I have only stories to tell.

Follow Allen Appel – My Life In The Big Red Band on WordPress.com
All of Allen's books can be found on Kindle at Amazon.com. Simply go to Amazon and enter Allen Appel in the search box.
Loading Comments...
%d bloggers like this: